Examples of work carried out, both before and after 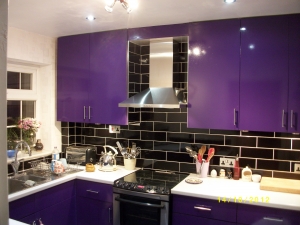 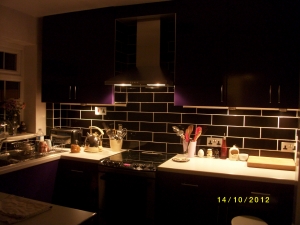 Smart under cupboard lighting with a connection to lighting mounted within the kick plate.  A 13amp spur fused to 3 amps to provide a supply to the cooker’s extractor fan and lights.

The cooker isolator point which was located directly above the cooker was changed for a smaller modern unit positioned at least 300mm away from the edge of the cooker. Additional sockets were added and conveniently positioned near to where electrical cooking appliances would be used. The 4ft neon strip light was replaced with spot lights with a feature centre light for character. Also installed in the kitchen was a heat detector positioned away from cooker heat source so that when the oven door was opened it did not activate the alarm. The heat detector and the other smoke detectors around the house were interconnected and wired on their own circuit directly to the consumer unit and placed with the downstairs lighting circuit for fuse protection.  The inaccessible sockets supplying the power for the fridge and freezer were protected with accessible switched fused spurs. 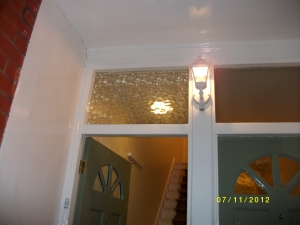 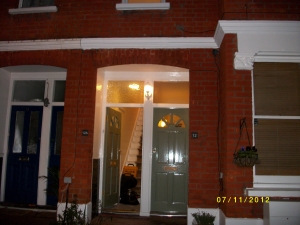 Exterior security lights can be convenient when looking for your house keys and locating the door lock and they do add a deterrence. But care should be taken to ensure your home does not look like a fortress and unwelcoming to your guests and visitors. That is why I fitted a carriage style lantern to soften the look whilst adding convenient lighting, for short durations as required. Care has to be taken to ensure that it does not activate by pedestrians or passing traffic as this can annoy your neighbours.